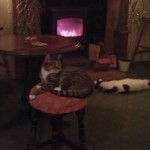 Well it’s been nearly two months since the new pub cats moved in and gradually they are becoming more comfortable in their new surroundings, so I thought it was the right time to write a little introductory piece on their  behalf.

As with most introductions let’s start with their names, Paddy, a black and white male cat and Nitty, a female tabby kitten. Paddy was a rescue cat from Ireland who shares his birthday with St Patrick, hence his name! Paddy has no ears after he had to have them removed due to skin cancer 5 years ago, he can hear perfectly well though!! Nitty is only 18 months old and is a playful cat with very distinctive markings.

They can usually be found near the fire, as in this picture. Both are very friendly and will happily be stroked.

While the cats are still settling in I would like to ask all customers to not feed the cats (despite how cute they may be) and keep any dogs on leads. Thank you.

Cooker of the Food
View all posts by Andrew →
Top